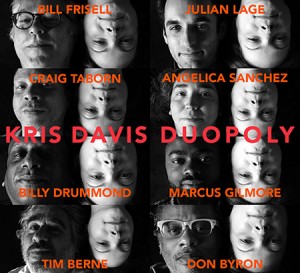 Every now and then, the jazz soul needs to hear some good musical conversations. Enter pianist Kris Davis with her glowing new recording, Duopoly.

Here, Davis has teamed up with eight gifted improvisers for 16 tracks of duet bliss. Bill Frisell, Julian Lage, Craig Taborn, Angelica Sanchez, Billy Drummond, Marcus Gilmore, Tim Berne and Don Byron each sit down with Davis to perform two duets, one composed, one completely free. For those who like their improvisation on the more traditional side, here’s a warning: Davis and company take this to the outer edges and back. For those who enjoy a great avant-venture, come on in, the water’s fine.

I love the organization of this album. Davis calls it a musical palindrome, because of the way she sequences the tracks. On the first eight tunes, she encounters guitarists Frisell then Lage, pianists Taborn then Sanchez, drummers Drummond then Gilmore, and reedists Berne then Byron. Then, Davis reverses the order on the second half of the program, as she and her duet partners dive into a world of free-form beauty. It’s incredible to hear the distinctions between artists, instruments and approaches, with Davis’ unique pianism serving as the voice weaving all of the music together. It’s also fantastic to hear how some of the more composed pieces, like “Fox Fire” with Craig Taborn, sound like pure improv, while free-form pieces, like “Don Byron,” sound completely composed. Often, seeing is believing when it comes to this kind of intimate interplay. Davis has you covered there, too, as a fantastic DVD with video shot by Mimi Chakarova is included in this terrific package.