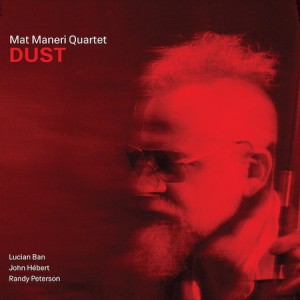 Viola player Mat Maneri first emerged during the 1990s, and has delivered introspective, at times mournful performances in a broad range of contexts ever since. In recent years, he’s been working a lot with saxophonist Ivo Perelman and pianist Matthew Shipp, contributing memorable moments to a slew of albums. Dust, though, is his first release as a leader in a while, so it’s no surprise he’s brought in players with whom he’s got a history. Maneri and pianist Lucian Ban released a duo disc, Transylvanian Concert, in 2013. They also recorded with bassist John Hébert on 2010’s Enesco Re-Imagined, with violinist Albrecht Maurer on 2015’s Fantasm, and with Evan Parker on 2017’s Sounding Tears. Maneri’s relationship with drummer Randy Peterson, meanwhile, goes back to the first decade of the bandleader’s career.

“Two Hymns” and “Retina” first were performed on Transylvanian Concert, and reappear on Dust. The new versions are tighter—“Two Hymns” is only six-and-a-half minutes long, while the live version was almost 11—but they still have a soft, ECM-ish feel, like the musicians are slowly inching toward one another in a dark room. In fact, most of the music here is subdued; when Peterson takes a solo on “Losed,” it’s a series of gentle rattles, like a small animal pushing a ping-pong ball back and forth across the surface of a snare drum. (He does erupt on “Last Steps,” though.) Hébert’s notes come so far apart, he rarely seems to be playing a melody at all, and Maneri is the leader only in that he logs the most playing time. There’s never a feeling that the other three musicians are there to support or spotlight him. This is a collective music, suspenseful without being tentative, and it’s as much about listening as playing.