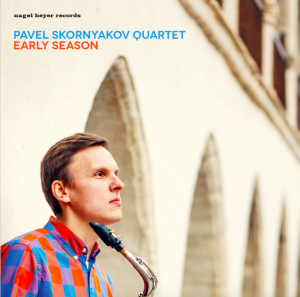 Russian alto saxophonist Pavel Skornyakov has a sweet, longing tone, verging on syrupy, that evokes the likes of David Sanborn and perhaps Kenny Garrett. That’s meant as a compliment, though Skornyakov still has a bit of maturing to do before joining their ranks. On his first album, Early Season, the bandleader proves to be a versatile leader, playing a series of impressively athletic solos that zip and dart all over the place.

Skornyakov, 31, assembled eight original compositions here, all of which he wrote between the ages of 19 and 25. And while his quartet plays a form of bright, energetic post-bop that doesn’t feel all that stylistically risky, it’s sturdy and self-assured nonetheless. On the faster numbers, Skornyakov brings each of his solos to a satisfying peak, wailing away with gutbucket intensity. But he’s at his best on the album’s only ballad, “Breeze,” a wistful composition displaying the full dimension of the bandleader’s sound.

It’s unclear why Skornyakov chose not to include more recent compositions on Early Season. The best possible answer might be that he’s saving them for future albums, which certainly would be welcome from this voluble saxophonist, who seems as if he has a lot more to say.