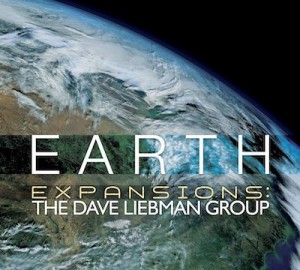 Typically, when we think of eco-conscious music, what we imagine is built around acoustic instruments. To some extent, we can credit this to the Paul Winter Consort’s “Earth Music” albums of the late ’60s and early ’70s, which used saxophone, flute, English horn and cello to articulate the composer’s intent. Those instruments were deemed more “natural” than electric guitars or synthesizers, even though the saxophone is very much a product of the industrial revolution, while the recording process itself is both technologically intensive and far from green.

All this came to mind while listening to The Dave Liebman Group’s Earth, an album that concludes the saxophonist’s Four Elements project (earlier entries include Water, with Pat Metheny, Cecil McBee and Billy Hart; Air, with synthesist Walter Quintus; and Fire, with Kenny Werner, Dave Holland and Jack DeJohnette). Here, Liebman takes the opposite approach to expressing the natural wonders of the world, emphasizing the textural possibilities of digital and electronic sound over the traditional sonorities of wind and strings. “I am the lone acoustic instrument juxtaposing the old and the new (with the drums in the same time zone),” he writes in the liner notes.

It’s not an obvious strategy, but it works—not because the music evokes specific landscapes or seasons, either. Rather than take a programmatic approach like, say, Ferde Grofé’s “Grand Canyon Suite,” Liebman’s band opts instead to use the breadth of its sonic palette to reflect the enormous variety of our earth. “Earth Theme,” then, conveys its sense of vastness by contrasting Liebman’s soprano against the heaviness of Tony Marino’s electric bass while Bobby Avey’s wispy, white-noise synths wash over the ensemble like ethereal mist. “Volcano/Avalanche” uses electronics to blur the tonal center of Matt Vashlishan’s wind synthesizer and Avey’s keys, while a different effect scrambles the sound of Marino’s bass, making it sometimes hard to tell up from down with the harmony. And the high point of “Concrete Jungle” comes in an improvised exchange between Liebman and Vashlishan in which the saxophonist reacts not just to the notes the synthesist is playing, but also the instrument’s shape-shifting textures.

Jazz certainly would benefit from more creative uses of digital and electronic instruments.