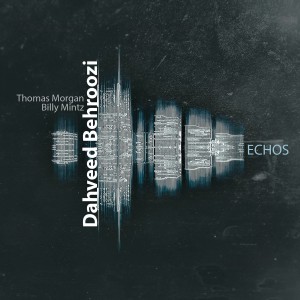 Classically trained pianist Dahveed Behroozi was already playing jazz professionally as a high school student from Heyward, California (often with a young bassist named Thomas Morgan). His training continued in New York with Fred Hersch before returning to his classical roots as a graduate student mentored by Ursula Oppens.

This diametrical journey between the twin pillars of jazz and classical music has left Behroozi in an apparent desire not to go anywhere further too quickly. His sophomore trio offering, Echoes, is stately in its chamber-
music aesthetic, and leisurely in its contentedness to savor the many colors and textures the players engage in with solemn, expressive purpose. The pianist is accompanied by his high school buddy Morgan, who has since risen to the top ranks of New York jazz bassists, and Billy Mintz, who has occupied that space on drums in rarified stasis for decades. They remain remarkably focused throughout the concise, nine-track album, moving lightly within the heavily improvised vehicles.

A slowly formed narrative appears in each episodic piece. There is retrospection between two different occurrences of “Chimes,” the second immediately more insistent and urgent. Some drama happens in “Gilroy,” as a series of repeated chord cycles are eventually interrupted by a gentle flourish of scalar activity. “Sendoff” is an extreme departure from the album’s otherwise serene demeanor — a bruising and ultimately triumphant sonic avalanche. The liveliest piece is “Tricks,” a blues-inspired vignette removed from any formal harmonic shackles, allowing Behroozi to finally hint at his impressive pianistic capabilities.