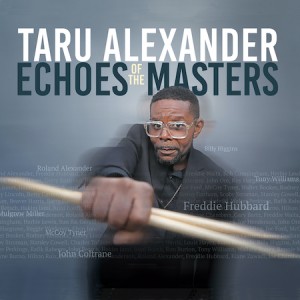 Drummer Taru Alexander celebrates the music of his father, the late saxophonist Roland Alexander, with a splendid quartet that makes late-’60s post-bop sound fresh and true. Saxophonist Antoine Roney and pianist James Hurt are at the top of their game, while bassist Rashaan Carter clicks with the leader, whose kick drum and engaging accents drive the mostly uptempo tracks and bind everyone’s efforts.

Hurt’s touch — even on his expertly articulated right-hand single-note runs — is innately percussive. His connection with Alexander is most clearly demonstrated on “Kojo Time,” a song the father wrote for his son, born while he was on tour in Europe. Roney’s tenor sound is bracingly muscular; his improvisations twist and turn themes as if he’s wrestling with them but always in control. Carter’s bottom line bounces and throbs. Alexander’s patterns across his kit exhibit creative variety, as well as fast hands and feet.

Of the material: The senior Alexander’s “Change Up” has a climbing motif, and “Kojo” a satisfying turnaround. “I Mean You,” credited to Thelonious Monk and Coleman Hawkins, is the occasion of a bright reading with singer Hanka G.; the smile in her voice makes up for some mis-intonation.

This album is fun listening, the ensemble united in its embrace and celebration of jazz that’s timeless — capable of generating new ideas and exciting performances, regardless of being nearly 60 years of age.