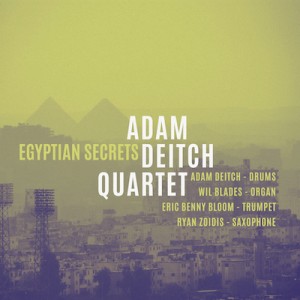 Drummer Adam Deitch (Lettuce, Break Science) insists that his quartet “isn’t exactly jazz,” though he allows that it “might be soul-jazz.” That seems disingenuous as its debut album, Egyptian Secrets, clearly is dyed-in-the-wool soul-jazz. Organ, two horns and guitarist John Scofield? C’mon. It’s the real deal, and a damn fine specimen, too.

One might even call it psychedelic soul-jazz, soaked as it is in reverb, effects and drone. That last signifier refers to Wil Blades’ pedal point on tunes like the title track, a menacing smoker with trumpeter Eric Benny Bloom and saxophonist Ryan Zoidis wah-wahing fervently over the organist’s pulsating sustain. It’s not all about pedal point, however. The Hammond choogles through the quartet’s churchy version of Michael Jackson’s “The Way You Make Me Feel,” playing bluesy fills during Sco’s improvisation, and takes magnificent features on “Dot Org” and “Summer Is Here.” If Deitch’s case is that his band is too funky to be strictly jazz or soul-jazz, he might have an argument: The drummer plays unabashed grooves. Nevertheless, it doesn’t preclude Egyptian Secrets’ jazziness.