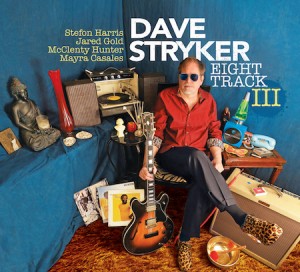 Jazz can range from deep, dark and edgy to easy and light, and guitarist Dave Stryker clearly has mastered the latter. With dozens of recordings as a leader in his portfolio, Stryker has added a pleasing new notch on his musical belt with his latest recording, Eight Track III, an album featuring reworked versions of popular songs from the late ’60s through the early ’80s.

Throwing in tasty alt-chords and harmonies, and reworking the rhythms and syncopations in unexpected places makes these updated arrangements seem like wholly new works. Stryker’s signature silky tone and dexterity on the guitar are pervasive throughout the nine tunes here, and there’s excellent solo work from organist Jared Gold and vibraphonist Stefon Harris, ranging from edgy and totally out-there to sparse, contained and elegant.

Styrker’s take on “Papa Was A Rollin’ Stone” is particularly hip. The organ in the background conveys a lush, mysterious, slightly spooky undertone that jibes harmoniously with the staccato beat of the drums and bass, creating an enthralling soundscape that Stryker dives into, picking out the song’s familiar melody lines, which are doubled by the vibes. Steely Dan’s offbeat hit “Pretzel Logic,” with its easy, swinging groove, is at once bluesy, jazzy and cool, while Stevie Wonder’s “Too High” is transformed into a fast, syncopated swing, with harmonies and rhythms orbiting out into the cosmos.

Eight Track III: Move On Up; Papa Was A Rollin’ Stone; Pretzel Logic; Too High; We’ve Only Just Begun; This Guy’s In Love With You; Everybody Loves The Sunshine; After The Dance; Joy Inside My Tears. (51:51)
Personnel: Dave Stryker, guitar; Stefon Harris, vibraphone; Jared Gold, organ; McClenty Hunter, drums; Mayra Casales (2, 3, 6–9), percussion.