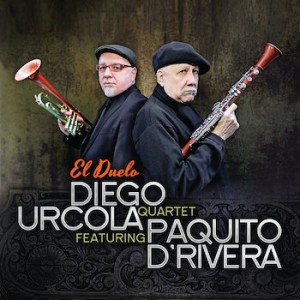 Diego Urcola has spent nearly three decades in the studio and on stage as a member of the Paquito D’Rivera Quintet, which makes this turning of the tables feel long overdue. But it’s apparent throughout El Duelo that he made every creative decision for the album to better support and highlight his mentor and friend.

That’s especially true in the choice of rhythm section. Urcola opted not to include piano here—a move that left a lot of space for D’Rivera to fill and play around in, lending an impish air to his solos on the original “Buenos Aires” and the group’s take of Monk’s “Bye-Ya.” Urcola also took care to showcase his and D’Rivera’s proficiency in jazz from both American continents. They delight equally in the cool pull of Gerry Mulligan’s “I Know, Don’t Know How” as in the hip-swinging title track, written by Argentinian composer Guillermo Klein. At the same time, there’s a noticeable stiffness throughout. As loose as the horn players get in their solos, they approach the melodies with caution, as if fearful of flying too far off the rails. Crisp and clean as El Duelo is, even a touch of grit would go a long way.