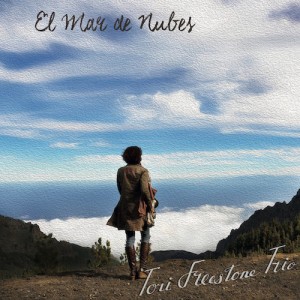 El Mar De Nubes is the second consecutive album by British saxophonist Tori Freestone to reference the natural phenomena of the Canary Islands; on the cover, she views the titular sea of clouds from atop Mount Teide. Viewed from 12,000 feet up, sea and sky can seem to commingle in a limitless vastness, and it’s tempting to make a connection between the cover’s wide-open vista and the chordless configuration of her trio.

But how free is the album? Freestone’s music rarely strays from metric time, and when it does, it quickly returns to a swinging groove; there’s more Billy Higgins than Sunny Murray in the trio’s rhythmic approach. And Freestone always has time for melody. She draws warmth and good humor from the theme of Sam Rivers’ “Beatrice,” which the group plays at a sauntering pace. And she taps into the reverent sentiment of “Shenandoah,” which appears twice—once as a soulful dirge, and again in a voice and violin-led rendition that looks back to Freestone’s time spent playing in folk groups. But sometimes she doesn’t know when to let a tune go, spending too much time on the herky-jerky head of “Hiding Jekyll” before the trio tangles in the track’s free-form middle section. El Mar De Nubes might benefit from a bit more of the vigor evidenced there.