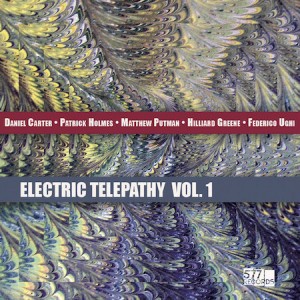 If it’s generally accepted that performers—at least those seeking some sort of artistic fulfillment—are engaged in a constant search for a language fit to dispense their ideas, Telepathic Band’s Electric Telepathy, Vol. 1 seems to find the Brooklyn ensemble scouting out at least two dialects.

Reedist Daniel Carter—an occasional part of the William Parker-Matthew Shipp axis of exploratory improvisation—gets top billing here, in part as deference to his work through the decades. But also because of his clear connection with clarinetist Patrick Holmes, the pair delivering slightly-off harmonies across the album.

But it’s mostly Matthew Putman’s ghostly keyboard washes that make Electric Telepathy, Vol. 1 work. “Horticultural Techniques” is based on his bed of echoes layered atop bassist Hilliard Greene and drummer Federico Ughi’s rhythms, enabling the frontline to seek out expressive and impromptu statements. The 20-minute opener, “Flesh Dialect,” ostensibly functions the same way, with ambience courtesy of Putman’s keys serving as one of the band’s most notable features. “Ghost-Watch,” though, encapsulates the troupe’s discovery of swing, Carter (this time on trumpet) and Holmes bumping up against Ughi’s persistent drumming after conjuring a groove about two minutes in.

It’s the uncertainty in both these vernacular approaches that makes Electric Telepathy, Vol. 1 worth a listen, and gives the Brooklyn ensemble such an auspicious name.