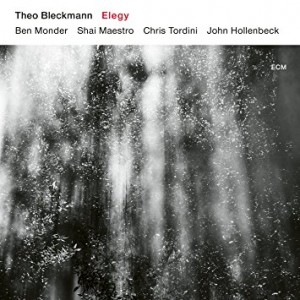 Vocalist-composer Theo Bleckmann raised his international profile via his collaboration with pianist Julia Hülsmann’s quartet on the 2015 tribute album A Clear Midnight: Kurt Weill And America (ECM), but on his new album, Elegy, he focuses on original compositions. More than most singers, Bleckmann treats his (frequently wordless) vocals as another instrument operating on par with those of his stellar quintet: guitarist Ben Monder, pianist Shai Maestro, double bassist Chris Tordini and drummer John Hollenbeck. The intriguing results here are closer to art rock than to mainstream jazz, with Bleckmann boldly occupying an artistic territory in which he has few peers. On “The Mission,” Bleckmann’s wordless vocals almost sound like a wind instrument, while Monder’s guitar work evokes a science-fiction soundtrack, and Maestro’s chiming piano adds to the drama. Elsewhere, during an instrumental break in “Take My Life,” Monder sculpts an intricate, muscular passage that wouldn’t be out of place on a prog-rock album, but the track is dominated by Bleckmann’s poetic lyrics, such as “Dim the light inside my eyes/ Then fill my lungs with quiet.” The title track, with its haunting vocals and Tordini’s droning bass, creates an otherworldly mood. Indeed, Bleckmann has said that each of the album’s songs “relates to death or transcendence in some existential way.” Bleckmann wrote all the words and music for this album, with the exception of the famous Stephen Sondheim tune “Comedy Tonight,” here given a radically slow arrangement, and an English translation of a poem by Chiao Jan (730–799), serving as lyrics for the track “To Be Shown To Monks At A Certain Temple.” (Bleckmann and his quintet will perform at the sonically adventurous Big Ears Festival in Knoxville, Tennessee, on March 25.)