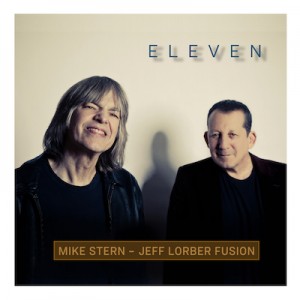 A variety of atmospheres makes Eleven, a joint effort by fusion veterans Jeff Lorber and Mike Stern, both unpredictable and entertaining.

Framed by Lorber’s upbeat “Righteous” and “Runner,” a buoyant piece that spotlights Stern, this journey through texture never loses momentum. Lorber shifts from piano to organ on several tunes, and Stern’s guitar tone changes according to the mood of each piece. It’s ringing on the Metheny-influenced “Nu Som,” grazes the blues on the swaggering “Jones Street” and tightens up on “Motor City,” Lorber’s funky tribute to Detroit.

The strangest cut here is “Rhumba Pagan,” a collaboration featuring otherworldly vocals, an assertive Lorber, tart horn accents and Stern at full tilt. At first, it seems both throwaway and anomaly, and its fadeout is lame. But the oddball bit still is largely mesmerizing. The album’s centerpiece—and longest track—is the guitarist’s majestic “Slow Change,” evoking the classic rock of Procol Harum in its stately riffs, while featuring the guitarist’s pyrotechnics. Although it might sound more like prog than jazz, the tune goes deep and is a welcome contrast to tracks like the wacky “Ha Ha Hotel.”

A key motif of Eleven is urbanity: “Big Town”—a tune by Lorber and his co-producer, bassist Jimmy Haslip—is a downtown cruiser, marked by the interplay between co-leaders, as Stern slides in and out of the keyboardist’s fluid theme. This first collaboration between Lorber’s group and Stern finds all involved engaged amid explorations of jazz-adjacent sounds. A bit more focus wouldn’t have hurt, though.