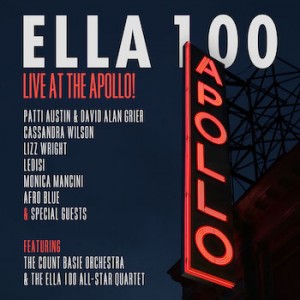 Singer Patti Austin and drummer/producer Gregg Field are in fine, familiar territory again. The simpatico pair collaborated on Austin’s 2002 album, For Ella, a loving tribute to Ella Fitzgerald (1917–’96), and they reunited on Oct. 22, 2016, for a concert celebrating the “First Lady of Song.” Highlights from the all-star show are chronicled on the winning album Ella 100: Live At The Apollo!, featuring Austin on five performances that illustrate precisely why she has been a fan favorite on the jazz festival circuit. Teamed with the Count Basie Orchestra (under the direction of Scotty Barnhart), Austin authoritatively swings her way through “A-Tisket, A-Tasket,” “When I Get Low, I Get High” and “How High The Moon.”

The venue was an important element in the proceedings because a 17-year-old Fitzgerald famously made her debut at the Apollo Theater in 1934. Nodding to that performance, the album has a segment in which Grier re-enacts what announcer Ralph Cooper might have said on that fateful night. Vocalist Ayodele Owolabi (then 17 and now going by the stage name Ayo) delivers her rendition of “Judy,” a song Fitzgerald sang at the Apollo.

Thanks to the power of the Basie band, this concert album will appeal to longtime Ella fans, as well as connoisseurs of contemporary vocalists. Wilson smolders on “Cry Me A River,” Wright—backed by the quartet—offers knockout renditions of “Love You Madly” and “The Nearness Of You,” and Afro Blue showcases tight harmonies on “Oh, Lady Be Good.” (A bonus track on the CD version features Andra Day navigating Nelson Riddle’s arrangement of “Ain’t Misbehavin’” with panache.)

The album concludes with a wonderful and welcome departure: a live rendition of Ella tenderly crooning the standard “People.” Fans who had the opportunity to hear her in concert are, to quote the lyrics, “the luckiest people in the world.”