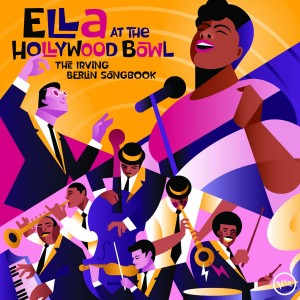 There are moments in this life to sit back, reflect and bathe in pure awe. With Ella At The Hollywood Bowl: The Irving Berlin Songbook, listeners get a little taste of absolute perfection: a grand idea presented with such grace and elegance that it seems simple, pure and divine. This previously unreleased music came from the private collection of Norman Granz, noted producer and founder of Verve Records. Grammy-winning artist and producer Gregg Field lovingly mixed this collection direct from quarter-inch tapes recorded during this elaborate 1958 concert. How elaborate? The concert includes a full orchestra, with arrangements conducted and arranged by Paul Weston, all to provide a feathery cloud for perhaps the greatest singer in jazz to float upon. And float she does. Fitzgerald’s voice is a wonder. Her songbook recordings (which included the Irving Berlin songbook) are often considered the best work she, or any other vocalist in jazz, has ever created. But to hear it live, at the venerable Hollywood Bowl, demonstrates how amazing all of the musicians on that stage were and just how amazing Ella’s artistry had become as she was entering the beginning of her 40s. From the downbeat of “The Song Is Ended,” through “How Deep Is The Ocean,” “Cheek To Cheek,” “Let’s Face The Music And Dance,” “Putting On The Ritz” and “Alexander’s Ragtime Band,” the voice and the music are timeless. Then there are the ballads. The strings on “How Deep Is The Ocean” pour straight into the soul. On “Russian Lullaby,” Fitzgerald’s vibrato flutters almost like a violin that wants to make you cry. And “Get Thee Behind Me Satan” offers a quaint remembrance of the temptations of love. All of this is made more exquisite by the stunning clarity of this recording, as if it were recorded yesterday. Before summer’s gone, this is a great one to cozy up to in the backyard in a comfortable chair and imagine that it’s Los Angeles in the 1950s, there’s a soft breeze blowing through one of the greatest music venues mankind has ever created — and on that stage is a voice that comes along only once in lifetime.