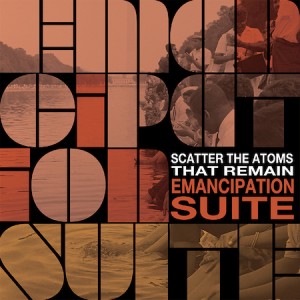 Scatter the Atoms That Remain

Drummer Franklin Kiermyer is enamored of John Coltrane’s late-period music, and with three fellow devotees mines that vein of soberly engaged, energy-imbued improvisation in Emancipation Suite, his 12th release since 1992. Subtitled “Equality–Compassion–Liberation” — like Trane’s Meditations tracks “Compassion,” “Love,” “Consequences” and “Serenity” — this quartet’s suite aims for the powerful sweep of works from 1965 to ’66, when the iconic saxophonist led McCoy Tyner, Jimmy Garrison and Elvin Jones into open-ended forms of increasing density, and subjected his classic quartet’s makeup to personnel flux.

The rhythm triumvirate of the band has been stable since 2017, Emilio Modeste taking the saxophone chair just in time for this pre-pandemic, live-in-the-studio recording, which boasts no “predetermination” and only one edit of the continuous, nearly 26-minute performance to create two sides for a limited-edition LP. He blows sturdily, as one standing literally or figuratively in front of Kiermyer’s kit must, although to compare his sound to Coltrane’s majestic virtuosity, profound drive and ethereal transcendence can’t help but put him at a disadvantage. Modeste plays well, squeezing simple motifs for all their urgent squeals and cries, and shouldn’t be faulted for not yet attaining the profundity of his model’s penetrating intonation and all-encompassing resolution.

Whitfield’s pianistic approach derives from Tyner’s, with thick chords and fast lines establishing fields of clustered, throbbing pitch. It must be a challenge for Gardner to provide the center around which everything swirls, but he does so handily. Over, under and through his colleagues’ efforts, drummer Kiermyer thunders and clatters, generating multiple simultaneous pools of percussive activity that bubble and burst like lava pits. His parts heard without the others’ would be symphonic. Here they dominate, his skins perhaps a touch tighter than Elvin’s, his cymbals slightly brighter, his demands of heroic response just as dramatic. Scatter the Atoms That Remain calls for universal freedoms such as it enacts.