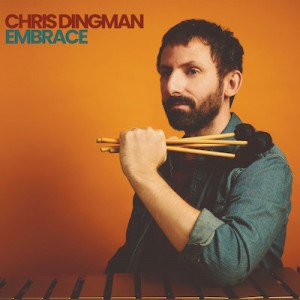 On his first two albums as a leader—Waking Dreams and The Subliminal And The Sublime—vibraphonist Chris Dingman worked within ambient, classical and jazz idioms to turn out meditative soundscapes for sextet. With his latest release, Embrace, though, he raises the compositional stakes a few notches: The new album centers on vibes, backed only by bassist Linda May Han Oh and drummer Tim Keiper. The challenge, Dingman holds, was to deliver the same melodic and harmonic richness as on his previous releases, but with half the players.

This pared-down ensemble actually suits the thematic thrust of the album’s nine originals, each one a facet of Dingman’s ever-evolving creative vision. At the heart of the disc is his desire to understand relationships—whether personal or musical—at their most elemental level: The opening softly lilting air “Inner Child” flirts briefly with harmonic distortions, written soon after the death of Dingman’s idol, vibraphonist Bobby Hutcherson; and the deeper-toned, persistently rhythmic “Find A Way” served as a palliative in the face of his father’s passing.

Dingman also seeks to express his deepening fascination with non-Euro-derived musical traditions on tunes like “Forgive/Embrace,” a reflection of the harp-like sounds of the kora, and “The Opening + Mudita,” an allusion to the Buddhist concept of sympathetic joy.

In stepping away from chordal instruments and horn soloists, Dingman willingly forgoes some of the lushness found on his earlier albums. But in these simpler compositions he speaks to deeper complexities—those that arise when one follows the heart.