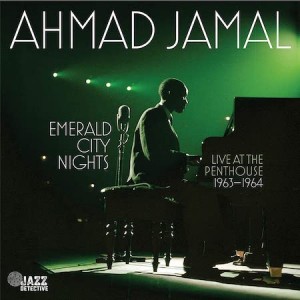 The Ahmad Jamal Trio was at the top of the jazz pops in the mid-1960s. The gloriously tight, powerhouse team was in big demand, a headlining act with a stellar musical reputation, radio hits and a calendar full of sold-out club gigs across the country. In the course of their regular travels, the trio’s annual appearances at the Penthouse in Seattle’s historic district were highly anticipated affairs, extended engagements that typically lasted 10 days and drew waves of audiences that were enthusiastic to say the least. More than a dozen of the group’s performances at the intimate, low-ceilinged room were broadcast and recorded by local radio station KING-FM’s on-air host and engineer Jim Wilke, and those air check tapes are the source of these previously unissued gems, presented here in a pair of deluxe packages from producer Zev Feldman’s new label imprint, Jazz Detective. Emerald City Nights: Live At The Penthouse (1963–1964) and (1965–1966) reveal the commanding, dynamic pianist in dazzling form, backed by bassists Richard Evans and Jamil Nasser and drummer Chuck Lampkin on the 1963–’64 shows, and by Nasser and drummers Lampkin, Vernel Fournier and Frank Gant on the 1965–’66 dates. Jamal has always stated his preference for live gigs — noting that there’s “no comparison” between performing before an audience and recording in the studio — and that mindset proves a powerful force in generating the momentum of invention that propels these vibrant sets. Covering much of Jamal’s signature repertoire from a golden era for the piano trio, the Live At The Penthouse collections are treasure troves for listeners who have followed the nonagenarian pianist, composer and bandleader’s long career, and fans of the classic soul-jazz spirit in general. The sound is excellent considering the live environment, thanks to Wilke’s quality source material and Feldman and company’s keen ability to refine and enhance tapes rescued from the vaults of jazz history. The limited-edition, double-LP vinyl sets are issued on 180-gram discs transferred from the original tapes and mastered by Bernie Grundman. The music is also available as two-CD sets and as digital downloads. A third, two-LP volume devoted to the Jamal trio’s 1966–’68 Penthouse recordings will be released at a later date, according to Feldman, whose production of all three Penthouse sets was supervised by Jamal himself. Both the 1963–1964 and 1965–1966 packages include substantial booklets with new reflections by Jamal about his work, as well as a treasure trove of pictures by celebrated jazz photographers Don Bronstein, Chuck Stewart and others. The 1963–1964 volume includes new interviews with Jamal’s hit-making contemporary Ramsey Lewis (1935–2022) and pianist Hiromi, while the 1965–1966 collection features interviews with pianists Jon Batiste, Kenny Barron and Aaron Diehl. Together, the irresistible music and enlightening bonus materials will transport you to a historic jazz listening room at a time when commanding pianism and feel-good grooves ruled the night.