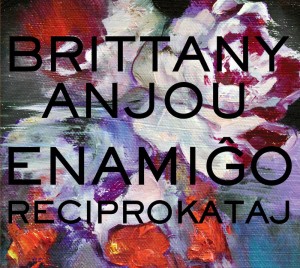 Why did pianist Brittany Anjou title her album Enamigo Reciprokataj, which translates from Esperanto to “reciprocal love?” Even after giving it a listen, the answer’s still unclear.

Anjou’s debut album, inspired by a Stravinsky ballet, is a strong, classicist piano-trio effort that nods to the work of Ahmad Jamal, Vince Guaraldi and even modern players like Cyrus Chestnut in its focus on melody and swing, while still journeying as far afield as she thinks the music wants to go. And she’s happy to lay waste to the instrument when that’s what’s called for: “Reciprokataj IV: Olive You” begins with a display of power that would mark the summit of most players’ performances. The piece goes through multiple transformations, exploring forcefully played blues and romantic frills, before finally drifting to a delicate landing.

Throughout the majority of the album, Anjou’s supported and egged on by bassist Gregory Chudzik and drummer Nicholas Anderson, who both are prominent in the mix, serving as counterweights and even challengers rather than mere accompanists. Toward the end of the disc, though, they’re replaced by Ari Folman-Cohen and Ben Perowsky, and “Reciprokataj V: Flowery Distress” has a darker, almost martial feel. Perowsky’s playing is more like an arena-rock drum solo than a jazz rhythm, and Folman-Cohen draws long groans from the bass with his bow. In response, Anjou pounds out low-end rumbles that feel almost pained. The album begins and ends with short tracks warped by electronic manipulation, almost as if you’re tuning the music in as it’s being broadcast from a distant satellite.