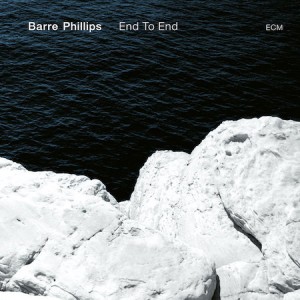 As much as any bassist in jazz—or even anyone on its periphery—California-born Barre Phillips has expanded the language and expectations for his chosen instrument.

He’s played a part in duo bass sessions alongside Dave Holland and organized an ensemble of three bassists and a drummer, in addition to putting together a succession of solo recordings that began in the late ’60s. There’s not time or space to reel off his accomplishments in others’ ensembles.

Phillips’ initial foray into solo bass, alleged to be the first of its kind, was issued under three distinct titles in three separate markets during 1969 and 1970: Journal Violone, Unaccompanied Barre and Basse Barre. Another solo dose of Phillips working over his instrument came on 1983’s Call Me When You Get There. And now, the longtime denizen of Southern France intends End To End to serve as the denouement of his solo bass odyssey.

The ECM release is segmented into “Quest,” “Inner Door” and “Outer Door,” each suites unto themselves, working through melody and bowed textures. Perhaps the most resonant statement is repeated on “Quest, Pt. 4” and “Inner Door, Pt. 4.” Creeping up that second time, Phillips’ reiteration of the progression might inspire some momentary confusion, a sort of déjà vu of the ear. But any listener with the patience for these pieces to unfold and allow themselves to be transported by the power of a single performer’s ability to entertain will find new worlds to explore on subsequent listens.