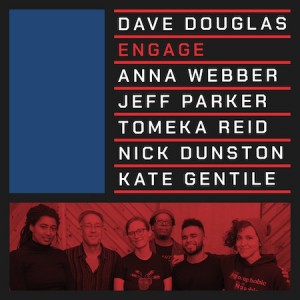 Political jazz is a peculiar beast. Unlike the more pop-oriented forms of protest music, there’s often no singer to act as a figurehead, and no lyrics to provide a polemic. At its most muddled, it works about as well as using abstract art on a campaign poster.

On the other hand, if you look at politics as a form of action, rather than a school of thought, playing jazz can be a surprisingly suggestive model. A jazz combo is, after all, a form of community, and how the individuals act together determines the success of the whole. Is there anything in art more uplifting than hearing a group of people come together to make great music?

That seems to be the thinking behind Engage, trumpeter Dave Douglas’ latest project. Describing the music in his liner notes as “compositions dedicated to positive action,” Douglas avoids partisan specifics and instead urges action “to stay positive and engaged through music daily.”

Musically, the positivity is expressed through writing based entirely on major triads. None of that half-diminished-seventh ambiguity here. But Douglas’ crew—woodwind player Anna Webber, guitarist Jeff Parker, cellist Tomeka Reid, bassist Nick Dunston and drummer Kate Gentile—are the sort who aren’t going to let triadic harmony limit them to “See Spot Run” simplicity. However straightforward the writing on the delightfully tuneful takes of “Showing Up,” the playing comfortably stretches limits, particularly when Webber’s alto flute and Reid’s cello are in creative counterpoint.

It should also be mentioned that Douglas can be pretty creative with his major-triad harmony, as “One Sun, A Million Ways,” with its closely intertwined trumpet lines (Dave Adewumi joins in here), makes plain. There’s a difference between “simple” and “simplistic,” after all. From the gospel-inflected groove of “Free Libraries” to the “Maiden Voyage”-style pulse that powers “Sanctuary Cities,” Douglas and company make a compelling case that standing up for shared values isn’t just good politics, but good art as well.