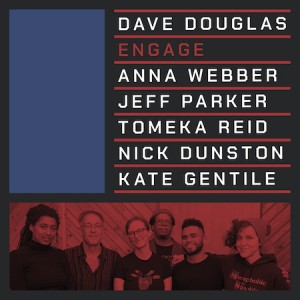 There are various ways to fight the power, and when it comes to ending the current assaults against equality, science, social justice and good old common sense, trumpeter Dave Douglas likes to use his exasperation to fuel a campaign of positivity.

The bandleader titled a 2018 outing UPLIFT and this new album ENGAGE because activism—especially creative activism—has transformative effects. Speaking of change, Douglas, heralded since his 1993 debut as a conceptualist whose ever-shifting interests steadily have yielded a wealth of distinct ensembles, introduces a new outfit here that creates a music of optimism.

Encouragement and assurance waft through the 12 pieces comprising the bandleader’s umpteenth album, and though the music sounds familiar—style becomes an artistic signature, even when you dodge formulas as doggedly as Douglas—it remains potent. A clarity of purpose is prominent in many of these tunes, with golden melodies leading the charge and the sextet’s feisty interplay exploding the themes. Rather than coming off like an ornery indictment of kids being caged at the border, “How Are The Children?” radiates a dark-hued idealism that offers solace while suggesting transcendence, with saxophonist Anna Webber digging in to offer a variety of emotions in a perpetually flourishing solo.

That’s a tad different than UPLIFT, a record that echoed some of the turmoil afoot in the States and abroad. Douglas, in ENGAGE’s liner notes, explained that writing and playing the tunes here is a reminder to “stay positive and engaged through music daily.” He’s recruited some deft improvisers for assistance, and there’s an enviably anthemic atmosphere to several tracks, some boasting pop savvy forms, adding an attractive undercurrent to the performances.

The core group—Douglas, Webber, guitarist Jeff Parker, cellist Tomeka Reid, bassist Nick Dunston and drummer Kate Gentile—is united in purpose. The sway of “Free Libraries” is substantial; the swing of “Living Earth” is deep; and the pliant changes of “One Sun, A Million Rays” are gripping. There’s plenty of old-school blowing, too. “Where Do We Go From Here” turns into a blast of brass when trumpeters Dave Adewumi and Riley Mulherkar join the action. And there are passages when the music recalls the clarion swag of Henry Threadgill’s early sextet—a reminder of how crucial group participation is to the success of any vibrant endeavor. That kind of spirited cooperation has political parallels as well. If we’d all activate and unite, Douglas seems to be saying, we could dump the pernicious bastards now in power and accomplish so much more.