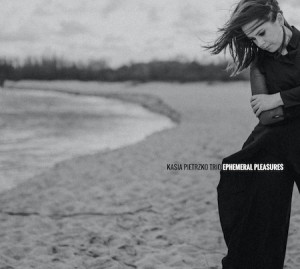 In a 2019 DownBeat interview, pianist and bandleader Kasia Pietrzko was asked about Polish jazz’s defining qualities.

She said, “Maybe just a little bit Romantic. This is what [Tomasz] Stańko has—really melancholic. I think all the Polish musicians have this melancholic thing, and now they can explore and mix together classical music and jazz.”

“Ephemeral Pleasures,” the opening title track of her second leader date, though, is buoyant and bright, bounding across a decidedly contemporary rhythmic backing. Within the first three minutes, Pietrzko effortlessly displays a deft and dynamic approach to voicing chords, unlooses a playful progression and pushes against the trio’s mounting volume, turning it into a few quizzical and quiet moments. In that interview from last year, she also discussed studying with pianist Aaron Parks, and his distinctly contemporary take on 21st-century piano-led troupes colors Pietrzko’s opening gambit here, as well as tracks like “Dark Blue Intensity Of Life” and “For T.S.,” despite that latter tune being dedicated to Stańko.

But there is a darker emotional hue that the pianist explores with her ensemble—bassist Andrzej Swies and drummer Piotr Budniak: The pensive “Dearest John” takes on the tonal colors Pietrzko surely encountered while studying classical music; and the series of five improvised “Episode” tracks sound as if they sprouted in tiny DIY rooms with pay-what-you-can fees and an interest in booking new-music.

That the bandleader’s able to so easily synthesize all of this amid a 10-track program—and during a relatively early part of her career—doesn’t mean she’s the next Stańko. But it does mean that we’ll likely be listening to her explore the nexus of these musics for a few decades to come.