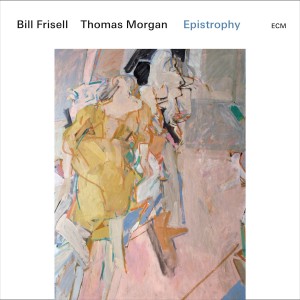 Recorded live at The Village Vanguard in March 2016, Epistrophy continues where the conversation between guitarist Bill Frisell and bassist Thomas Morgan left off on Small Town.

In the hands of this duo, a song like “All In Fun” assumes a double meaning. While the pair indeed are enjoying this musical experience, they bring an unforced profundity to the occasion. This tune in particular has what only can be described as a dark buoyancy, a feeling of bobbing along evening waters.

A nod to the folk song “Wildwood Flower” introduces “Save The Last Dance For Me,” which in this context takes on a magical realism. Liberated from their popular associations, tensions emerge in melodic symmetry. Played as lovingly as one could imagine, Paul Motian’s “Mumbo Jumbo” finds Frisell tastefully augmenting Morgan’s psychosomatic filter. The James Bond theme “You Only Live Twice” also gets a heartfelt makeover, its machismo now a quieter drama. And Billy Strayhorn’s “Lush Life” emerges from a series of still images, each further detailing the narrative. The title track and “Pannonica,” both from the Thelonioius Monk songbook, are the set’s core, each a reflection of the other: The former’s sprightly charm and linear paths pair beautifully with the latter’s eddying contemplations. The traditional “Red River Valley” is another key passage of synergy that seems tailor-made for these musicians. Like the Frank Sinatra hit “In The Wee Small Hours Of The Morning” that closes, it activates what is truest and purest within them, and in us for being privy to their dialogue.