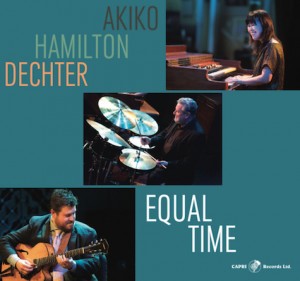 The best thing about the trio organist Akiko Tsuruga formed with drummer Jeff Hamilton and guitarist Graham Dechter is that none of them are trying to reinvent the wheel. Theirs is a straight-up, hard-swinging organ trio in the classic tradition. And all they’re trying to do is excel at the form—which they do. In spades.

Start with the groove, because if the rhythm isn’t right, we might as well pack up the B-3 and go home. Hamilton—as should be obvious to anyone who’s heard him behind Diana Krall, the L.A. 4 or any of the big bands with which he’s played—is a master of skip-ride swing, a player whose light touch belies the power of his pulse. But that’s only half the magic here: The rest lies with the uncanny swing of Akiko’s left-hand bass lines, which not only walk convincingly, but also push the beat the way a bassist would.

Because of those two elements, this trio is always deep in the pocket. It doesn’t matter whether it’s a churchy blues like Hank Mobley’s “A Baptist Beat,” an uptempo swinger like Steve Allen’s “This Could Be The Start Of Something Big” or even something as rhythmically tricky as John Coltrane’s “Moment’s Notice”—where the head slips gracefully between 3 and 4—the groove is always top-notch, and the solos make the most of it.

Listen, for example, to the end of “I Remember You,” where the three players trade eights. Dechter’s solo is lithe and tuneful, with cool, bop-fueled momentum, and Hamilton answers it with an equally melodic drum solo. Akiko takes a more soulful approach to the bridge and Hamilton answers in kind, with a snappily syncopated reply. It really is a band of equals—one that makes mainstream jazz fans wonder why Akiko and Dechter aren’t better known.