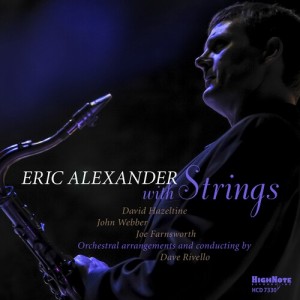 Thanks, no doubt, to the precedent-setting sweetness of Charlie Parker With Strings, there’s an expectation that any pairing of a saxophonist and a string section will result in something ballad-heavy and lush. Obviously, there have been exceptions—Joshua Redman’s recent Sun On Sand being an obvious example. But Eric Alexander With Strings plays delightfully to type, with tempos slow and sultry, and plenty of minor-key melodies.

Even so, the album never sounds like a throwback, in part because Dave Rivello’s arrangements rely as much on the rhythm section as the strings, but mostly because Alexander understands that the sweet, sustained string harmonies are more effective if they stand in contrast to the muscular insistence of the saxophone. As such, his tenor tone remains big and punchy, while his solos retain the hard-bop aggression of his combo recordings. Even the dreamy “The Thrill Is Gone,” immortalized on the 1954 album Chet Baker Sings, takes on a bit of edge when Alexander tosses the melody aside and works over the changes in his gruff, slow-burning solo. The strings might still whisper sweetly, but Alexander and his band (particularly drummer Joe Farnsworth) have work to do.

Traditionally, “with strings” albums are heavy on standards, and here, too, Alexander follows the formula while slyly tweaking it. Perhaps the only immediately recognizable tune on With Strings is Leonard Bernstein’s wistful sigh of regret, “Some Other Time,” which Alexander plays against type, taking an upbeat, bop approach to the groove that brings out the harmonic genius of Bernstein’s chords. But Alexander makes a strong case for the others as overlooked gems, particularly Henry Mancini’s moody, Latin-inflected “Slow, Hot Wind,” and “Lonely Woman”—not the Ornette Coleman lament, but a sweet, mournful Horace Silver number that’s ideally suited to the plangent luster of Alexander’s ballad tone.

One area in which Alexander could have been a little less traditional is the album’s playing time, which at roughly 37 minutes is fine for an LP, but seems a bit miserly in digital format. Still, the listening experience is so opulent that even a little bit feels like a lot, a sonic luxury to be savored at leisure.