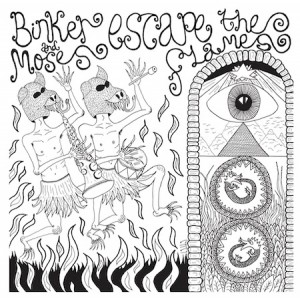 Though live performances still are paused, the past several months saw an avalanche of archival concert recordings be released.

Saxophonist Binker Golding and drummer Moses Boyd captured some magic one evening in June 2017 at London’s Total Refreshment Centre, running through the first half of their 2017 album Journey To The Mountain Of Forever (Gearbox). So many of the compositions on Escape The Flames are opportunities for Boyd to find every impeccable beat to push behind Golding’s playing. Surprisingly, though, the reedist plays sparingly throughout the evening. This isn’t to say it’s not flashy, just precisely what’s called for. Golding’s more adventurous showing on “Trees On Fire” definitely can induce the stank face. But it’s Boyd’s drumming that’s unrelenting, always on beat yet always finds new ways to go beyond it.

Things open up more on “The Shaman’s Chant,” where the pair explicitly prove their simpatico, weaving in unison and giving listeners a sense of their live performance as the album’s energy builds. There’s an arc here that happens organically, as opposed to the sequencing of their studio releases. It has more to do the open time a live performance might have granted them, as opposed to the fierce acuity of a studio session. Yet, Escape The Flames is one of those live performances that really merited a release, regardless of the pandemic. The album now could serve as a kind of consolation, providing a sense of connection and discovery—elements captured in their finest form on one summer night in London.

Escape The Flames: The Departure; Intoxication From The Jahvmonishi Leaves; Fete By The River; Trees On Fire; The Shaman’s Chant; Leaving The Now Behind. (66:41)
Personnel: Binker Golding, tenor saxophone; Moses Boyd, drums.