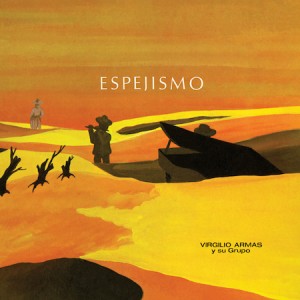 (We Are Busy Bodies)

Reissues can be frivolous, or essential. This one falls into the latter category. Canadian label We Are Busy Bodies has reissued the rare and sought-after 1973 Venezuelan jazz album Espejismo by Virgilio Armas Y Su Grupo, offering a snapshot of the thriving music scene in early-1970s Caracas, until now largely undocumented because of the musical dominance of Venezuela’s far-larger, southern neighbor Brazil. Pianist and bandleader Armas combines Latin jazz and post-bossa swing with homegrown variants, honed over years of playing in clubs in the Altamira and La Castellana districts of the capital.

And yet, We Are Busy Bodies did not stop there. It has also reissued the Virgilio Armas Trio’s album De Repente, previously only available from the tiny Discos A&B label — a one-off, self-financed project.

So, how is it all? Insanely beautiful. De Repente rips out of the gate with its title track, a tightly busy, piano-based composition, before Armas switches over to Fender Rhodes for “De Repente (2a. Parte),” deconstructing what he’s doing, as he does again and again on these two discs. His piano playing is so elegant, tremblingly so, on “I F” and “In Time.”

His take on “Aguas De Marzo” on De Repente is the highlight of both discs here. Armas starts it curiously on piano, then becomes more lively once his rhythm section joins. He sets up a central figure, both on piano and Fender Rhodes, but keeps hinting at a single, simple phrase way up right on the keyboard, which is eventually mimicked by an anonymous person playing a whistle, giving the track a street flair. It’s so charming it gets stuck in your head for days, and would seem to demonstrate Venezuela’s local influence on Armas’ sound.

Espejismo adds a flutist (Domingo Moret), and the band becomes more spaced out, making way for more percussion and more complicated arrangements. On “Indecision,” his electric piano work is such one almost thinks it’s a guitar. By “Sobre El Orinoco,” Moret has crowded Armas out, and he takes back over and reminds you why he’s here.

Overall, De Repente is better, but thankfully they’re both back.