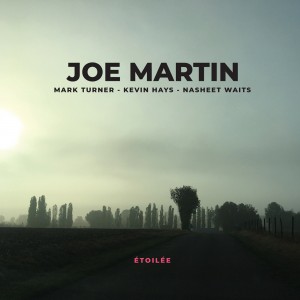 From the first notes of the album-opening “A World Beyond,” Joe Martin’s bass is deep in the pocket, laying a funk line that’s profoundly intertwined with Nasheet Waits’ drums and Kevin Hays’ Fender Rhodes. The sound is redolent of early-’70s fusion, but as Mark Turner’s astringent tenor enters with the melody, it becomes clear this is no throwback. Instead of sticking with the funk, they let the time turn free and the tempo meander before returning to the initial groove, a strategy that makes “A World Beyond” less a tune than a journey.

Étoilée is Martin’s third album as a leader, and by far his most confident. It helps that he’s in familiar company—Turner and Hays also played on his first recording, Passage—but the real magic has to do with his approach to time. Apart from a few boppish moments on “Safe,” Martin avoids the conventions of a walking bass line, opting instead for a freer, more contrapuntal approach. There are moments—the solo intro to “Malida,” for instance—when he seems to be strumming the bass like a guitar. But he infrequently puts himself out front, preferring to leave his bass subsumed in the sound of the drums, an effect that’s partly a function of the album’s very natural room sound, but mostly a reflection of the rhythmic chemistry between Martin and Waits.

For that matter, the whole quartet seems remarkably simpatico, and the music changes tempo, texture and intensity with breathtaking ease. From the off-kilter shuffle that launches “Prospecting” to the lush string coda (Martin playing arco and massively overdubbed) that closes “Long Winter,” Étoilée is an ideal blend of stylistic variety and artistic consistency.