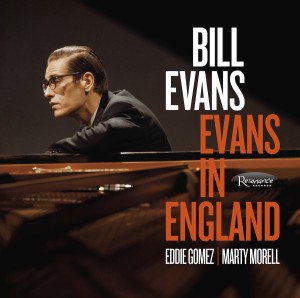 As far as vintages go, 1969 was one of the finest for pianist Bill Evans.

Having just formed his longest-lasting trio with bassist Eddie Gomez and drummer Marty Morell the year before, as well as temporarily kicking his heroin habit, ’69 marked Evans entering a new era of stability and exploratory creativity. And it’s this nascent self-discovery documented on a double album of Evans’ trio playing at London’s Ronnie Scott’s club that year.

Recorded by a French collector and Evans fan known only as “Jo,” the 18-track tape now has surfaced; the 84-year-old wanted it released to the public before his death. As live recordings go, Evans In England is particularly intimate; the basement confines of Ronnie’s absorbing the murmurations of the crowd, amplifying the twang of Gomez’s percussive plucking and booming to the hollow thuds of Morell’s kick drum. If you listen in, it’s as if you can hear the hushed chatter and foot-tapping from the tables beside you.

As opposed to other notable live recordings of Evans’ trios in their various incarnations—1961’s Sunday At The Village Vanguard or 1968’s At The Montreux Jazz Festival—this Ronnie Scott’s collection is markedly energetic in its interpretations of Evans standards, such as “Waltz For Debby” and “Re: Person I Knew.” The former centers around a polyrhythmic interplay between Evans and Gomez, showcasing the almost-telepathic improvisatory connection that would come to define their collaborations. The latter sees Morell providing luscious brushed textures to underpin Evans’ deft touch.

The height of this trio’s brilliance comes on a propulsive rendition of “So What,” where Evans makes space for a fluid interchange between Gomez and Morell, before re-entering the frame in cascading lines of rhythmic chord changes, confirming the myriad possibilities for this iconic standard. In fact, Evans showcases his signature quiet confidence throughout the record, making each tune his own. His trio transforms Theolnious Monk’s “’Round Midnight” into a deeply swung, kaleidoscopic groove, while “Stella By Starlight,” strays into bebop territory as Evans doubles up on the original’s solipsism.

While reissues and rediscoveries of “lost recordings” are increasingly commonplace, it’s records like Evans In England that reaffirm their importance, as well as the continued need for these rare finds to make their way into the world. Here, we witness a group at the height of its powers, not just rewriting what has come before in its playing, but shaping what is yet to come and what continually inspires artists today.

Evans In England: Disc One: Our Love Is Here To Stay; Sugar Plum; Stella By Starlight; My Foolish Heart; Waltz For Debby; ’Round Midnight; The Two Lonely People; Who Can I Turn To (When Nobody Needs Me). Disc Two: Elsa; What Are You Doing For The Rest Of Your Life?; Turn Out The Stars; Re: Person I Knew; Goodbye; Come Rain Or Come Shine; Very Early; So What; Midnight Mood; Polka Dots And Moonbeams. (55:24/56:02)
Personnel: Bill Evans, piano; Eddie Gomez, bass; Marty Morell, drums.