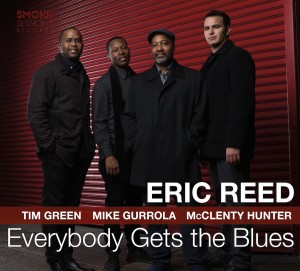 Because it plays off conventions instead of challenging norms, straightahead jazz is seen by some nowdays as being a less inventive form of jazz. But as pianist Eric Reed shows here, there are plenty of ways to offer a new twist on an old tune.

Take, for example, the medley “Yesterday/Yesterdays.” Though the conflation of titles initially might seem a bit trite, the veteran pianist does an impressive job of connecting the dots. He starts with a dramatic rubato reading of the Beatles tune, changing the harmony enough to give it a bluesy, modal shift, but not enough to change the melody. That makes the transition to Jerome Kern’s moody statement of regret much easier. But the kicker comes when Reed heads back to the Beatles and then, channeling his inner Keith Jarrett, finding the gospel groove beneath the ballad. It’s hardly revolutionary, but it’s smart, tuneful and grooves like hell.

Reed is one of those tremendously gifted players who has chops galore, but seldom uses them to show off, instead letting his obvious command of dynamics add color to the melodies he plays. In this, he shows a debt to the great Cedar Walton, who’s referenced on three of the album’s nine tunes, including Reed’s mashup “Cedar Waltzin’/Don’t You Worry About A Thing.” Bassist Mike Gurrola and drummer McClenty Hunter perform with similar restraint, although Hunter’s brush work is too articulate to entirely escape notice, while saxophonist Tim Green is particularly adept at the lyric melancholy Reed favors on ballads.