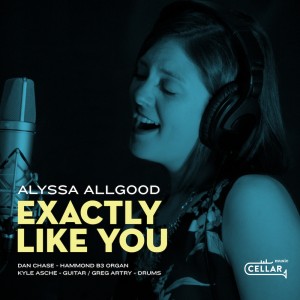 An impressive bop-oriented singer based in Chicago, Alyssa Allgood won a 2014 Down Beat Student Music Award in the Undergraduate Vocal Jazz Soloist category. Two years later, she recorded her debut, Out Of The Blue, which found her not only singing well, but introducing her lyrics to songs by Hank Mobley, Joe Henderson, Wayne Shorter and Lee Morgan.

Now 24, Allgood comes roaring out of the gate on her second album, singing with enthusiasm and power during an uptempo version of “Exactly Like You.” Joined by organist Dan Chase, guitarist Kyle Asche and drummer Greg Artry, she’s very much in her element, featuring an impressive range while vocalizing in a conversational style that’s sometimes way behind the beat.

Allgood stretches her repertoire a bit here with the inclusion of two originals, a Michael Jackson hit (“Rock With You”) turned into soul jazz, and a tune by Stevie Wonder. But most rewarding are her renditions of jazz standards. Allgood sings her lyrics to Morgan’s “Hocus Pocus” (a song based on “Mean To Me”) that finds her essaying the occasionally wide intervals effortlessly and scatting creatively for two choruses. She interprets Thelonious Monk’s “Ask Me Now” with quiet emotion, sounds joyful on “The More I See You,” interacts with drummer Artry on “Alone Together” and gives “Darn That Dream” a medium-tempo treatment.

While Allgood mostly sounds at her best on hotter material, her surprising version of “Yardbird Suite,” here rendered as a medium-slow ballad, is convincing and offers the prospect of an interesting future.

Exactly Like You: Exactly Like You; Hocus Pocus; Rock With You; Ask Me Now; By My Side; The More I See You; If It’s Magic; Alone Together; Waltzy; Darn That Dream; Yardbird Suite. (59:35)
Personnel: Alyssa Allgood, vocals; Dan Chase, organ; Kyle Asche, guitar; Greg Artry, drums.