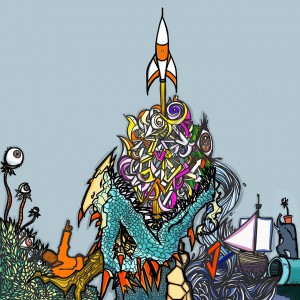 It was only a matter of time before producer Nico Segal (aka Donnie Trumpet) released a jazz record. Though the 24-year-old beatmaker is famous for his craftwork on albums by hip-hop artists Chance the Rapper and J. Cole, he’s also a lyrical and imaginative trumpeter whose productions vibrate with the genetics of hard-bop and fusion. Fans have caught glimpses of this style throughout Segal’s discography, most notably on the album Surf by The Social Experiment, on which soul and r&b samples provided the cushioning for rappers Big Sean, Quavo, Erykah Badu, Kyle, Busta Rhymes and others. The power of that album came largely from Segal’s unique aesthetic vision, which sought to fuse the boom-bap of hip-hop with the searching improvisation of jazz. It was a sound that clearly struck a chord with listeners: Surf was the first free download on iTunes, and to date, it has been streamed more than 180 million times. The JuJu Exchange is Segal’s latest project, and the group’s new album, available exclusively in download and vinyl formats, finds the trumpeter pushing his art into more ambitious climes. Recorded with a couple of fellow Chicagoans and childhood friends—the brothers Julian Reid (piano) and Everett Reid (drums) and bassist Lane Beckstrom—Exchange re-creates the atmosphere of a loose jam session through the lens of a meticulously produced hip-hop program. The finished product is awash in good vibes, maintaining a coherent soundscape even as tracks vary in their proximity to pop and mainstream jazz. Some, such as “Glide,” veer closer to trance-inducing EDM, while others, especially the lovely “Patients,” could have been lifted from a lost recording by pianist Bill Evans. As a trumpeter, Segal is laconic and cool, a player prone to terse phrases and winding, introspective lines, but he can also ratchet up the intensity when the mood strikes, as he does with fiery aplomb on the title track. That song also features the album’s silkiest groove, with a warm, loping synth line that opens the door to endless exploration. Here (and elsewhere on the album) Segal and crew carry the tune toward thrilling destinations.