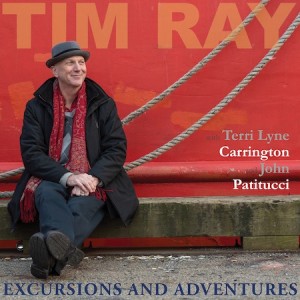 For a lot of jazz fans, the interest in this album will lie more with the side players than the leader, and fair enough. Tim Ray is a talented and accomplished pianist, but because much of his career has been spent playing behind pop artists—Lyle Lovett, most notably, but also Aretha Franklin, Bonnie Raitt and Jane Siberry—his name is less likely to ring bells than the names of drummer Teri Lynne Carrington or bassist John Patitucci. And to be honest, listening to Carrington and Patitucci mix it up on tracks like the angular, funky “Messiaen’s Gumbo” is one of this album’s greater pleasures.

But don’t take that to mean that this is in any way a lopsided trio, because Ray is more than capable of holding up his end. For one thing, he’s a remarkably rhythmic player, someone who doesn’t simply work a groove, but strengthens and intensifies it. “Nothing From Nothing,” the Billy Preston chestnut that opens the album, is full of bluesy harmony and left-hand-driven gospel flourishes, and it’s a joy to hear the bandleader cut loose. But it’s his comping behind Patitucci’s electric bass solo that really seals the deal, laying down a second layer of funk against Carrington’s already authoritative groove.

There’s a similar sense of rhythmic abandon to their take of The Rolling Stones’ “Paint It Black,” a tune so well suited to jazz reinterpretation that it’s almost a shock to realize that it has hardly been done before. But it’s not just the trio’s sense of groove that makes it work; it’s also because they’re more than happy to stretch the harmony to its limits. The aforementioned “Messiaen’s Gumbo” is a case in point, a Patitucci composition that combines Crescent City funk with harmonic ideas derived from composer Olivier Messiaen’s modes of limited transposition. Opening with a fatback duet between drums and bass, it’s eloquently funky, but also nicely dissonant, thanks to the way Ray’s piano pushes the chords further and further from the tonic, as if Dr. John were momentarily possessed by Craig Taborn.

Thelonious Monk’s “Trinkle Tinkle” is equally playful, thanks to a conversational approach that underscores the composition’s wit, while Franz Lehar’s “Yours Is My Heart Alone” evokes the classic Bill Evans trio, both in its swinging interplay and pellucid approach to harmony.