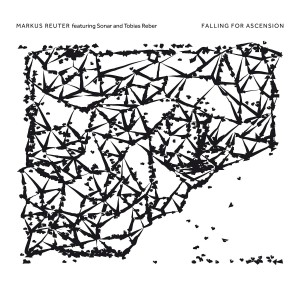 If you set aside considerations of popularity and commercial success, this album represents something of a supergroup, with outstanding musicians coming together to hopefully make some kind of synergistic magic. And as seems to be invariably the case with supergroups, the results are frequently enjoyable without being particularly notable.

This is primarily a meeting of minds between Reuter and SONAR, and on the surface would seem an ideal situation: leading prog-rock guitarist meets leading minimalist rock group. Put out by Nik Bärtsch’s Ronin Rhythm label, a central point in the current exploration of ensemble polyrhythms going on in Switzerland (of which SONAR is an important component), Reuter and SONAR mostly talk at each other, with little possibility for enlightenment.

The differing styles and concepts turn out to be pleasant acquaintances, not intimates. Each of the generically titled tracks—they imply what is a non-existent large-scale form—is full of prog grooves, with Reuter’s Fripp-influenced lead voice adding a new element to SONAR’s conception. Each is very much an exercise in basic song form parsed through odd meters and shifting pulses; “Condition I” lays out the aesthetic with a riff laid over an eighth-note beat gradually, and cyclically, foreshortened via a diminishing numerator.

Reber adds complexity via digitzed textures and Reuter explores dissonance that stands at a tangent from the main path. That path can be gripping at any tempo or in any meter, like in “Condition IV” and the extended coda “Unconditional.” But the music depends so much on pure repetition and on basic additive minimalism that the level of interest and satisfaction comes down to how inspired the riffs are, rather than the quality of structural thinking or playing. That leaves dead spots and longeurs that indicate barriers the two sides could not negotiate. DB