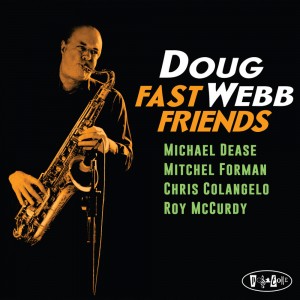 L.A.-based saxophonist Doug Webb is an extremely busy player with a number of TV and movie credits, including Law and Order and The Simpsons, where he was Lisa Simpson’s saxophone “voice.” But every time he steps out as a leader, Webb makes the most of the opportunity, teaming up with high-quality musicians and choosing top-shelf material to go along with his traditional, but creative, originals.

On Fast Friends, he’s brought in trombonist Michael Dease, pianist Mitchel Forman, bassist Chris Colangelo and drummer Roy McCurdy, and put together a program that explores multiple facets of the classic hard-bop sound. Webb contributes four originals, but the album also includes tunes by Lee Morgan and Charlie Parker, among others. The majority of the pieces are played fast and forcefully, with plenty of quick-witted interaction between saxophone and trombone. One notable exception is “Dream Stepper,” which is set to a gently swaying Brazilian groove. “A Night In Tunisia,” by contrast, starts out fast and becomes a rocket ride, with McCurdy slamming the kit in a way that belies his 81 years.