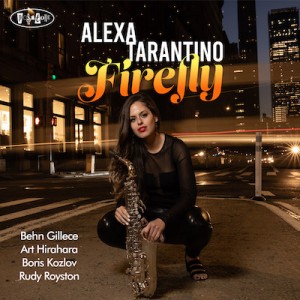 Firefly, Alexa Tarantino’s third record with Posi-Tone, has her back in the bandleader’s chair. It’s a 12-track effort combining interpretive takes of Wayne Shorter compositions (“Iris,” “Lady Day”), pieces written by her bandmates and, most notably, a multi-movement suite by Tarantino titled “Moment In Time.”

The approach Tarantino used to conceptualize and assemble Firefly worked serendipitously well with her intent to compose as a way of responding to and coping with last year’s tribulations. The suite showcases catharsis in the assuaging of Tarantino’s emotions, while also upholding a secondary purpose in revealing the landscape of an artist’s mindset during such prolonged isolation. In this regard, the suite is demonstrative on both an internally individual and broadly relatable scale.

Tarantino doesn’t overthink her execution on the Shorter contributions, giving an emotive saxophone performance driven by instinct. Meanwhile, “Spider’s Dance,” “Mindful Moments” and “Move Of The Spirit” do a wonderful job introducing this iteration of personnel behind Tarantino. The varying personalities of each piece support Firefly’s core vision: to highlight the creative light within individual people and the collective light born from unifying that energy.