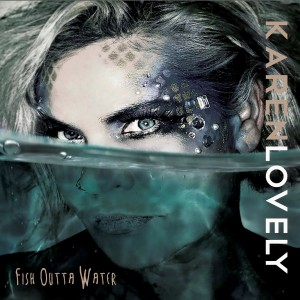 Blues-rock vocalist Karen Lovely assembled a winning team for her previous album, Ten Miles Of Bad Road, which garnered a 4-star review in the April 2016 issue of DownBeat. She worked with a completely different set of musicians for her fourth studio album, Fish Outta Water—and the results are fantastic. This album’s linchpin is Eric Corne, who has worked with such blues stars as John Mayall and Walter Trout. Corne produced, engineered, mixed and co-mastered the album; he wrote or co-wrote nine of its dozen tracks; and he contributed acoustic guitar, harmonica and backing vocals to three cuts. Lovely has a charismatic voice, and Corne does a masterful job of enhancing the arrangements with just the right instruments. Examples include David Rahlicke’s cornet on “Waking Up The Dead,” Eric Gorfain’s violin on Lovely’s composition “Hades’ Bride (There Was A Time),” Phil Parlapiano’s upright piano on the gospel-flavored toe-tapper “Next Time” and Skip Edwards’ retro-sounding Farfisa on the title track. Fans of Lucinda Williams’ early-2000s albums would probably enjoy Fish Outta Water, partially because two of the singer-songwriter’s key collaborators are part of Lovely’s band here: Taras Prodaniuk plays bass throughout the program, and guitar slinger Doug Pettibone plays on five tracks, including the blues-rock tune “Molotov Cocktails.” Lovely, who has been recognized as a nominee or winner by five different blues organizations, will be on tour in 2017. Her upcoming shows include the Tawas Blues by the Bay festival in Tawas City, Michigan (Aug. 26), the KJAZZ Hollywood Blues Bash in Los Angeles (Sept. 9) and the Michigan BluesFest in Lansing (Sept. 15).