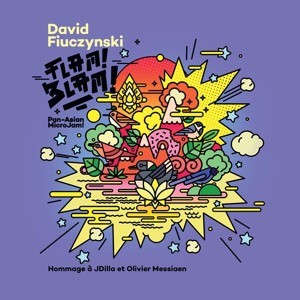 Guitarist-composer-bandleader David “Fuze” Fiuczynski stumbled upon the wonderful world of microtones the first time he picked up a fretless guitar with his Screaming Headless Torsos trio back in the late ’80s and early ’90s. His interest in non-tempered music and the “notes that fall between the cracks” eventually led him to a full professorship at the Berklee College of Music, where in 2012 he became director of Planet MicroJam, an institute within the school that explores the use of microtones in jazz, ethnic folk music and other contexts.

For his second recording for the London-based RareNoise Records, Fuze recruited several of his past Planet MicroJam students to help him realize his grand vision, which involves paying tribute to French composer-organist Olivier Messiaen and to the inventive rap producer J Dilla (who popularized hip-hop’s now ubiquitous “flam beats”).

Another element at work in the CD is ornithological: Fiuczynski transcribed birdcalls and built compositions around them (an additional homage to Messiaen, who in the 1950s penned numerous orchestral pieces based on birdsong).

That’s a heady agenda for any artist, but Fiuczynski pulls it off in organic fashion on this remarkable outing. And while he possesses the chops of a Buckethead, Steve Vai or any other six-string shredder you can name, here, his fabled chops take a backseat to his concept (with the exception of the astounding chops-laden showcase “Oiseaux JDillique”).

Throughout FLAM!, Fiuczynski utilizes field recordings of five birdcalls (the Common Loon, the Carolina Chickadee, the Northern Nightingale, the Blackface Solitaire and the Brazilian Uirapuru) and transcribes them to be played by the various instruments in his microtonal ensemble.

This is an idea that had been previously explored by Messiaen and more recently by composer-arranger-bandleader—and noted birdwatcher—Maria Schneider. Fiuczynski’s use of these non-tempered birdcalls provides the melodic content and motifs for this incredibly ambitious venture.

Another flavor in this exotic gumbo is implied in the subtitle: Pan-Asian MicroJam! That Pan-Asian quality is represented by master reedist Yazhi Guo (a member of the Hong Kong Chinese Orchestra since 1999), who plays a gamelan-like instrument on “Dance Of The Uirapuru” and stretches on suona (Chinese oboe) on the open-ended, free-jazz “Gagaku Chord Candy.” Classically trained violinist Helen Sherrah-Davies also delivers bold, striking improvisations on “Q&A Solitaire” and “Waldstimmen.”

Fiuczynski opened the Pandora’s Box on non-Western tuning on his 2012 RareNoise Records debut, Planet MicroJam. He pushes the envelope quite a bit further on his latest audacious microtonal project.