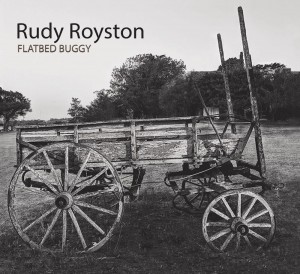 Fierce drummers who lift the bandstand with a blend of poise and push are some of jazz’s most exciting improvisers. For the past several years, Rudy Royston has been one of these percussionists, an esteemed traps maestro whose sense of swing is marked by a catholic slant; he has a million ways to accent the action, and his playing—as repped by work with saxophonist JD Allen and guitarist Bill Frisell, among others—arrives with a joyous oomph that supercharges the music at hand. But his compositional interests are broad, and when leading his own ensembles, the stormy attack of a hard-hit snare and splashy ride cymbal isn’t the only story he has to tell.

Flatbed Buggy illustrates just how expansive Royston’s scope is these days. By stressing variety and dodging routine jazz tacks, the middle-aged whirlwind signals that he’s a risk-taker who’s ready to follow his muse down uncommon roads. This is his third album as a leader, as well as the third distinct ensemble he’s presented. When you design a front line of bass clarinet (John Ellis) and accordion (Gary Versace), and build your string section with both bass (Joe Martin) and cello (Hank Roberts), you’re banking on relatively unique blends to carry the day. In Royston’s case, this setup is utterly refreshing.

Though the drummer grew up in Denver, he enjoyed visits with his father back to his native Texas. This new music harks to the childhood days he’d spend amid the pleasures of rural escapades. Mildly sentimental, often cinematic, the program boasts a willful sense of grace that sustains itself, even when the momentum truly starts to percolate. After a series of serene reflections, “The Roadside Flowers” arrives all hopped up on pulse, but still possesses an inner calm that adds dimension to its emotional scope.

Royston has said that addressing parts of the classical repertoire in school goosed his imagination when it comes to crafting unusual hues in his own work. A handful of pieces bookend this thought. “boy…MAN” stresses melodic morphing over trad improvisation (the title references time passing), and its dark mix of strings and reeds offers an orchestral flair. Likewise, the eerie drama that wafts through the start of “girl…WOMAN” is one of album’s most fetching moods. The band’s cozy approach to interplay is spot-on, harking to pastoral beauty with the kind of poetry Frisell brought to Big Sur (OKeh). For Royston, Flatbed Buggy is a trip to the country that opens up several new vistas.