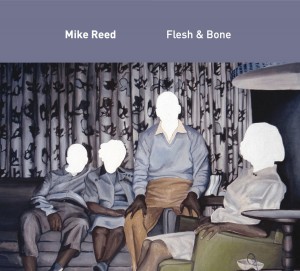 The saying goes that whatever doesn’t kill you makes you stronger, but for drummer Mike Reed, the events of April 4, 2009, got a bit too close to mortality for comfort. That’s the day he and the other musicians of the band People, Places & Things were delivered into Prevov, Czech Republic, while a neo-Nazi rally was scheduled to take place. The rally turned into a riot, but the racially integrated combo managed to escape harm, and Reed was inspired by the experience to compose an album-length suite.

Flesh & Bone isn’t a straight narration of what happened that day, but rather a meditation upon the cultural heritage that Reed cherishes. The music honors the examples of Duke Ellington, painter Archibald Motley and a host of Chicago-rooted free-jazz drummers without overtly replicating their diverse examples. Reed added Tate, and guests Ben Lamar Gay (cornet) and Jason Stein (bass clarinet) to his original quartet, which includes bassist Jason Roebke and saxophonists Greg Ward and Tim Haldeman. With its historical depth and vigorous performance, the music satisfies on its own terms; by exemplifying those qualities it defies the hateful sentiments of the rioters and their ilk.