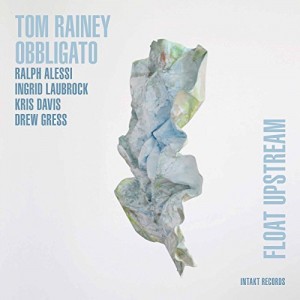 Drummer Tom Rainey is an artist fluent in the languages of both straightahead jazz and the avant-garde. Early albums found him providing cast-iron support to mainstream artists such as pianist Fred Hersch and vocalist Roseanna Vitro, while more recent projects have planted him in exploratory bands led by saxophonist Tim Berne and violinist Mark Feldman. In 2013 Rainey recorded the album LARK (Skirl) with trumpeter/cornetist Ralph Alessi, saxophonist Ingrid Laubrock and pianist Kris Davis, and for the Tom Rainey Obbligato’s eponymous album in 2014, he added bassist Drew Gress. Rainey’s new album, Float Upstream, features the same lineup. The band’s mission objective has been to filter Great American Songbook standards through a light-scattering prism of avant-impressionism. Float continues in a similar vein, but it shifts the thematic focus to love songs. Lyrical content, melodic shape and harmonic structure are all fair game for Rainey’s musical abstractionism, and the results are astounding in their novelty and freshness. The standard “Stella By Starlight” is bent into angles almost unrecognizable here. The tune begins in a noir-ish mist, out of which emerge the sly, roving voices of Alessi and Laubrock. Signposts of the song’s familiar melody eventually become perceptible, landing a profound punch once it solidifies by tune’s end. “What Is This Thing Called Love?” projects a similar air of intellection, smearing the tune’s sharply delineated chord changes into a watercolor blur. Throughout, Rainey’s drumming is agile and heated. His solo on “There Is No Greater Love,” full of clattering bursts and tumbling fills, sets the stage for a vigorous round of group interplay.