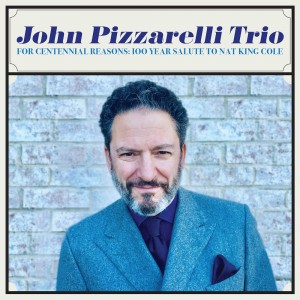 As a Great American Songbook flame-keeper, vocalist and guitarist John Pizzarelli’s unpretentious, song-centered approach has earned wide crossover success during a career that includes numerous tribute recordings honoring both jazz and pop artists. But Pizzarelli never is more at home than when covering his early idols, like Sinatra and Cole, whom he spotlighted on a pair of discs from the ’90s, Dear Mr. Cole and P.S. Mr. Cole.

Sparks fly most brightly here when the drummer-less unit channels uptempo numbers from Cole’s trio period, driven by Pizzarelli’s urgent four-to-the-bar comping. But the ballads succeed also, notably the understated and heartfelt “When I Fall In Love.” Though the bandleader’s vocals don’t have that smoky, sonorous feel that Cole possessed, his relaxed phrasing, focused pitch and knowing way with lyrics makes for compelling renditions of these standards.

Two quirky food-themed obscurities are included, too: “Save The Bones For Henry Jones (’Cause Henry Don’t Eat No Meat)” and “I’m Such A Hungry Man,” a lesser Bobby Troup number that overstays its welcome by relentlessly rhyming locales with dishes. It’s fun, nevertheless. But Troup’s greatest tune serves as a fitting finale: “(Get Your Kicks On) Route 66,” a Cole signature and longtime Pizzarelli staple showcasing the spirited trio at its well-oiled swinging best.

For Centennial Reasons: 100 Year Salute To Nat King Cole: Straighten Up And Fly Right; A Hundred Years From Now; The Very Thought Of You; (I Would Do) Anything For You; I’m Such A Hungry Man; It’s Only A Paper Moon; Body And Soul; Nat King Cool; When I Fall In Love; Save The Bones For Henry Jones (’Cause Henry Don’t Eat No Meat); Hit That Jive, Jack!; Could-’Ja; Red Sails In The Sunset; (Get Your Kicks On) Route 66. (56:33)
Personnel: John Pizzarelli, guitar, vocals; Mike Karn, bass; Konrad Paszkudzki, piano.