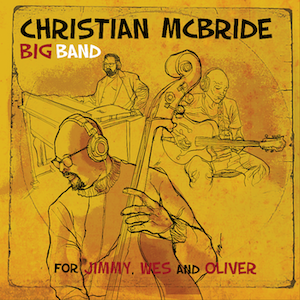 Oddly enough, bassist Christian McBride and organist Joey DeFrancesco hadn’t ever officially recorded an entire album together. They’ve finally decided to take up the task, and it harkens back to their shared love for the Jimmy Smith/Wes Montgomery collaborations of the late ’60s.

Clearly, the essence of their muses is encoded in the pair’s musical DNA. Hard-swinging and infectious grooves are the elemental forces at play here, with guitarist Mark Whitfield dutifully capturing Montgomery’s sound and tasteful phrasing, while DeFrancesco conjures Smith’s bluesy rancor and grease-lightning right hand. McBride, as is his trademark, drives a powerful low end as lithe and stable as a Tesla Model X. Four of the 10 tracks are as a quartet; a fun blowing session among friends. The rest of the album features the big band making use of several charts by Oliver Nelson, who arranged and conducted the large ensemble for those Smith/Montgomery albums. Nelson’s treatments of “Night Train” and “Milestones” are innovative and energetic, and his arrangement of “Down By The Riverside” is a tour de force, decades ahead of its time. McBride’s troops execute the material with precision and professionalism, constructing a sturdy launchpad to fire their rockets.

More than 50 years ago, two musicians at the height of their careers met to make essential recordings. It’s nice to know that sort of thing can still happen in 2020.