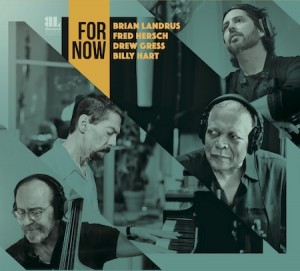 Brian Landrus’ inner Harry Carney comes into full bloom on For Now, his 10th album as a leader.

Like Carney—who anchored the Duke Ellington Orchestra’s reed section and wrenched listeners’ hearts as one of the band’s featured soloists for more than 45 years—Landrus finesses the baritone saxophone and bass clarinet in a most loving manner, deftly mining the sonic treasures that dwell at the core of those instruments. And, à la Carney, he frequently indulges in waves of invigorating vibrato that bring the most lustrous tones of those low woodwinds to life.

Shedding all inhibition, Landrus bares his soul on this emotionally charged program of 10 original compositions, two brilliantly interpreted Thelonious Monk tunes and a fresh take on the standard “Invitation.” The dream-team rhythm section of pianist Fred Hersch, bassist Drew Gress and drummer Billy Hart enables Landrus every step of the way, engaging in a constant exchange of ideas with the leader and providing appropriately hip contexts for the wide range of earnest emotions he puts on exhibit.

Also on board are the excellent young trumpeter Michael Rodriguez, who dovetails with Landrus on octave-unison lines and harmonized passages throughout For Now, and violinist Sara Caswell, who on several tracks joins Joyce Hamman (violin), Lois Martin (viola) and Jody Redhage-Ferber (cello) on velvety, collaborative string quartet arrangements by Landrus and the distinguished opera composer Robert Aldridge.

As on Harry Carney With Strings—the Norman Granz-produced mid-’50s gem that presented the Ellingtonian baritonist at the helm of a jam-session-sized combo augmented by a small orchestra—the strings enhance the emotional impact of For Now with elegantly voiced touches of sophistication, drama and mystery. The string section also plays an important role here in giving voice to many of the classically informed harmonic concepts that Landrus brings to bear upon his jazz compositions, a modern-minded approach manifested most recently on his remarkable 2017 large ensemble recording, Generations (BlueLand).

Landrus always has swung his low-B-flat off on bari, and he offers plenty of that swagger on For Now. But throughout the new album, a gentler approach to the big pipes comes into the foreground. His bari flutters with utmost grace, his bass clarinet sobs for humanity and his alto flute floats cloud-like through moody skies. With For Now, Landrus has created a work of astonishing beauty. Let the revealing liner notes by Grammy-winning composer Herschel Garfein, who co-produced the album with Aldridge, serve as your listening guide.