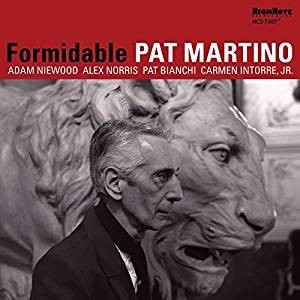 Fans of straightahead jazz have reason to rejoice because guitar icon Pat Martino has released his first studio album as a bandleader in 11 years. For the aptly titled Formidable, he is teamed with his working trio—organist Pat Bianchi and drummer Carmen Intorre Jr.—and on six of the nine tracks, the group is expanded to a quintet, with trumpeter Alex Norris and tenor saxophonist Adam Niewood. Martino, 73, has crafted a program of six intriguing interpretations, along with three original compositions from his long discography. Martino, Norris, Niewood and Bianchi all contribute exciting solos to a catchy rendition of “Nightwings,” which was the title track to a 1996 album the guitarist recorded for the Muse label. Norris and Niewood also bolster “On The Stairs,” which appeared on Martino’s 1974 LP, Consciousness, and they spice up a new arrangement of “El Hombre,” the title track to Martino’s 1967 Prestige debut. Among the aspects that make this album a keeper are a sturdy commitment to swing, and the generosity of a leader who lets his gifted accompanists stretch out with solos. A couple of ballads—Ellington’s “In A Sentimental Mood” and the Charles Mingus tune “Duke Ellington’s Sound Of Love”—are performed in a trio setting, showcasing Martino’s mastery of tempo and illustrating that a smoldering flame can be just as hot as a raging inferno. Indeed, on those two numbers, the trio gloriously proves that less can be more. Elsewhere, the quintet explores Hank Mobley’s “Hipsippy Blues” (with Norris on flugelhorn) and Dave Brubeck’s “In Your Own Sweet Way,” demonstrating Martino’s exquisite taste in material. (Martino and the quintet that recorded Formidable will appear in New York at Jazz Standard on Nov. 9–12 and in his hometown, Philadelphia, at Chris’ Jazz Cafe on Nov. 24–25.)