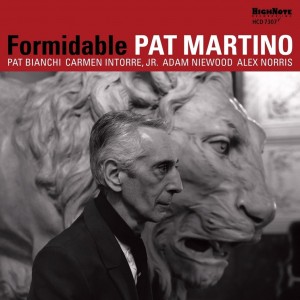 Formidable starts with a bang. “El Nino” offers a bluesy, organ-groove-heavy take on Joey Calderazzo’s memorable tune, followed by a two-chorus string of phrases on Pat Martino’s guitar that tells a story and maintains its melodic character even in his fast runs. Then come trumpeter Alex Norris and tenor saxophonist Adam Niewood trading adrenaline-fueled, gratifying eights, fours and twos before finishing off in (gloriously ragged) unison.
Alas, the album is never quite so good again. About half of the remainder is nonetheless quite enjoyable. Dave Brubeck’s “In Your Own Sweet Way” and Martino’s own “El Hombre” top the list: Pat Bianchi devours the former with Hammond-organ relish, and the six-stringer submits an inspired solo that celebrates the latter’s waltz rhythm. Martino’s heated samba “Nightwings” gives Norris his best, most exploratory solo on an album that tragically underuses its horns. But the core trio does magic together on “In A Sentimental Mood,” drummer Carmen Intorre Jr. outdoing them all with his beautiful brushwork.

There are duds, though. Save for some unexpected Bianchi exclamation points, “Duke Ellington’s Sound Of Love” comes off as a bland ballad. “On The Stairs” and “Homage” swing hard but generate pedestrian ideas. Martino’s least supportable idea is sequencing Hank Mobley’s “Hipsippy Blues” right after “El Nino”; the two tracks are in the same key, making “Hipsippy” sound like a (tamer) retread. Pace the title, a half-strong album isn’t exactly formidable—but one supposes calling it Semi-Formidable wouldn’t help.