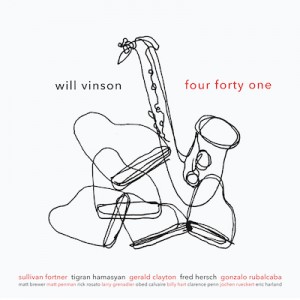 Will Vinson calls himself a frustrated pianist, which will be less of a surprise if you’ve heard him play, because the young Londoner (who’s now based in New York) has a subtle harmonic sense that evolved over seven leader dates. But his Whirlwind debut sees him fulfill something of a dream project by recording in duo and quartet formations with no less than five major keyboard artists and their respective rhythm sections.

By far the most important, in the sense of musical affinity, is Gonzalo Rubalcaba. With Larry Grenadier and Eric Harland, the group takes on “That Happened,” a clever reimagining of “It Could Happen To You” with a verve that hasn’t been around since the bebop days. But there are other joys here, too. Sullivan Fortner’s front-of-church “Boogaloo” is a perfect opener, and the relaxed approach to recording, with no rehearsal and very little studio fuss, lends a palpable warmth and spontaneity to the proceedings. Gerald Clayton’s “Cherry Time” has a dark, throbbing interior sustained by Matt Brewer and Clarence Penn, while his “I Am James Bond,” far from being upbeat and cocksure as the title suggests, is a delicious ballad.

Vinson eats up the situations, and there isn’t a single clunker. He’s always been one of those players who deals with sometimes daunting new tunes like the young Bobby Fischer doing speed chess—but with humor and heart. In fact, every track here invites the wishful thought that there were an album apiece with each ensemble. That might, of course, be the next step. But for the moment, this feels like a musical dream come true.