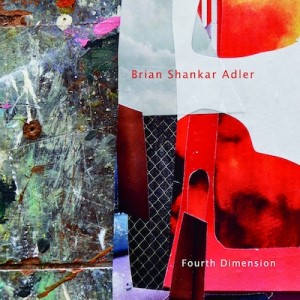 Brian Shankar Adler doesn’t so much lead his band from behind the kit as he guides them to a place where all involved feel emboldened to break through perceived limitations of the genre.

The drummer, who as a child spent time living at a New York-state ashram, solders together contemporary ideas and at least passing references to Gary Burton’s electric ensembles from the 1960s on Fourth Dimension, Adler’s seventh date as a leader. There’s a healthy dose of Indian classical music throughout, which could be attributed either to the bandleader’s time at the Shree Muktananda Ashram, where silent meditation was on tap, or simply his interest in percussion. And while the drummer’s an affiliate of the Brooklyn Raga Massive, the music on Fourth Dimension hues toward the personal, as cuts named “Gowanus” and “Watertown” sit next to “Mantra” and “Rudram.”

“Windy Path,” a low-key, contemplative excursion, might sit most comfortably with the jazz designation, piano and vibes out front and guitar in a supportive role as Adler gently urges on the quintet. It’s a minor mood, one that serves as a ballast to some of the more outré fare here. But even as “Gowanus” revels in its experimentalist tendencies—some backward tape moves and shreddy guitar contributing to the vibe—Adler’s ensemble looks to combine jazz’s history, the bandleader’s childhood experiences and the music’s increasingly global resolve.