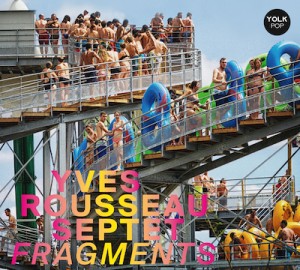 Last year, Yves Rousseau put together a seven-piece ensemble to perform and record this program of “fragments” inspired by memories of progressive rock music—a heady, testosterone-charged pop subgenre that made a strong impression upon the French bassist when he was a student in the mid-1970s.

Since that initial period of discovery, Rousseau has refined his taste for prog-rock indulgence, incorporating ideas inspired by bands like King Crimson, Yes, Genesis and other prominent artists of the era into his vast creative arsenal. With a wealth of experience as a genre-hopping player dating back to the late 1980s and a more recent reputation as a prolific composer and ambitious bandleader, Rousseau takes listeners on a nostalgia trip with Fragments, a collection of all original pieces (with just a bit of borrowed material from influential guitarist Robert Fripp and star singer-songwriter David Crosby), teeming with mechanical arpeggios, blazing Moog synthesizers, bombastic big-kit drumming, virtuoso-level electric bass lines and haunting, heavily compressed electric guitar solos.

France-based fans of prog-rock with an appetite for well-executed music they’ve never heard before are advised to check out Rousseau’s Fragments Septet in concert Oct. 8 at Le Rocher de Palmer in Cénon, Oct. 9 at Jazz MDA in Tarbes, Oct. 23 at Pan Piper in Paris and Nov. 12 at the D’Jazz Nevers Festival.